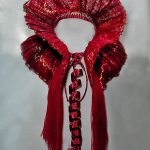 Max participants: 12, taken as checks are received. Payment is required to reserve a spot.

The world isn’t flat, so why should you think of your weaving as always being flat? You have spent years learning the rules of two dimensional weaving; now learn how to break those rules to weave 3D sculptural forms. Basket weavers have been weaving three dimensional objects since antiquity, but this class will give you the thought processes and ideas for weaving 3D forms on your loom. See for examples of sculptural weaving, and start thinking about the shapes that you would like to weave!

This is a hands-on workshop of 3 days in length, approximately 6-8 hours per day.

Each student will need to bring a table or floor loom, with a minimum of 4 shafts, that has been previously warped per instructions that are sent out ahead of time. The warp will be tied to the front cloth beam, sleyed, and threaded through the shafts as instructed. However, the warp will not be entirely beamed onto the back beam prior to class. Each student will need between 2 and 4 clean, empty milk or juice jugs (the kind with a loop handle) that can be filled with water and hung off the back beam as weights to provide tension for certain sections of the warp. Each student will bring several extra bobbins that can be used (as they will be shown) to attach the chained warp sections to the water weights.

Students will need to bring their own shuttles (3 are recommended), weft yarn, a reed or threading hook, and scissors. Students may bring other tools as needed.

Sally will provide the students with certain design materials and some small specialized tools. Handouts will be provided.

Prerequisites: Registrants must be able to warp their own loom ahead of time following special instructions provided by Sally.

At our meeting/workshop on Tuesday, I will be selling fair trade handwoven and other handcrafted goods from two women’s cooperatives in Guatemala, Mayan Hands and UPAVIM. Please bring cash or checks and be prepared to buy!

This is the last year I will do this, because I’m needed more at home. If anyone is interested in doing it next year, I’d be happy to explain what is involved and to help next year. Basically, I get a consignment of goods, check the shipments against the inventory list, take the stuff to various places to sell, and send back the unsold items. Most sales are at the Harvard Unitarian Church’s Fair Trade Faire.  It’s a very worthwhile cause, and seeing and handling all the goods is fun.

See you on Tuesday!

Due to the snowstorm, the workshop scheduled for today has been postponed one week, to 10 Dec 2019. We anticipate the details will all be the same, but need to confirm the location. Stay tuned for updates, and enjoy the bonus day, maybe with some weaving?

The 3 December 2019 Nashoba Valley Weavers’ Guild meeting will start at 1 pm and the workshop promptly at 1:15. End time is 3 pm.
LOCATION: the Congregational Church in the center of Harvard, just to the right of the Country Store. Not the church entrance, but the large door on the annex. We will have a sign on the door. It will be on the second floor, there is an elevator.
WORKSHOP: Ply Split Braiding with Sarah Fortin. If you have not already signed up, please contact Leslie at shebwoso@gmail.com.
Materials fee: There is a $15 materials fee, the guild will cover $5 of that for members.
Also, Dorothy will have a table set up for Mayan Hands if you would like to do some shopping. Cash or check accepted.
AND the registration for the 3-day Sally Eyring workshop in April will open at the beginning of the meeting. See the 10/29/19 email to guild members for details. 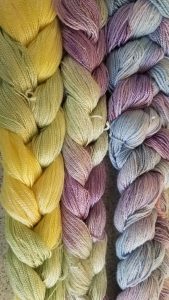 Our program for Tuesday evening Oct 22 will be to paint some warps.

This will be a hands-on program and you must have your own warps.

Warp must be wool, other *animal* fiber, or silk.  Warp should be white
or another *light* color to be “painted”.

Warp MUST be at The Fiber Loft by 4:30 pm on Monday Oct 21.  (The warps
must be soaked in a mordant–citric acid or vinegar–before we can paint
them.  Suzanne will do this on Tuesday.)

If you cannot make the meeting, drop your warp off on time to The Fiber
Loft and we will paint it for you.  (We are not sure what colors will be
there, we will use our best judgement!)

This is hand painted, not dipped.

Suzanne will provide bottles of dye.  We will put warp on plastic wrap
and paint, and then wrap up and take home and microwave.

If, after everyone has finished painting their first warp, there is dye
and time left, you can paint a second warp, but not before we are done
with all the first warps.

If you have any questions about the correct yarn, or you need some yarn,
call Suzanne at the Fiber Loft (978-456-8669 or yarn@thefiberloft.com)
for purchase.

We will be using these warps for this year’s Guild Challenge.

If you want to be part of the Challenge but cannot get your warp to the
Fiber Loft by Monday, and cannot make the meeting Tuesday, please let me
know – Leslie programs@nvwg.org

See you Tuesday.  Social/library time begins at 7pm.  Meeting to follow at 7:30.

Please join us for the official opening of Fivesparks and our Guild exhibit this evening! All are welcome, so please pass this along to friends and family.
Meet the weavers!
Opening Reception, Friday, 13 Sptember, 7-9pm
Fivesparks
7 Fairbank St.

Light refreshments will be served. 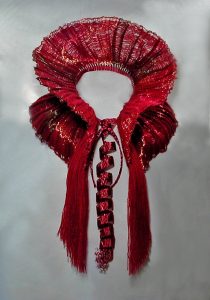 From the League of NH Craftsmen Newsletter:

HQ was contacted by a lovely woman who, with her husband, had worked for over 25 years doing production weaving for interior designers and architects throughout New England. She is located in Cabot, Vermont . Her husband passed away and she has the following available for sale:

150 lbs roving – wool and mohair, cleaned and ready to use

200+ lbs of quality wool yarns in a variety of colors

**Weavers – please share this information with anyone in your circle who might be interested. It would be a great help to this individual to sell these items for a fair price**

There are no more upcoming events.