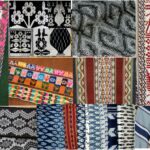 Laverne Waddington has been learning to weave on simple looms with indigenous teachers in South America since 1996. In her home in Santa Cruz, Bolivia, she draws on ethnic design influences from around the world to create pieces on a backstrap loom using the various techniques and structures she has studied in South and Central America as well as with backstrap weavers from Vietnam and Mayanmar.
Since 2010, she has published eight instructional manuals on the various woven structures and finishing techniques that she has studied and produced a dvd on Operating a Backstrap Loom.
Her articles on backstrap weaving and indigenous textiles have appeared in Handwoven magazine. Shuttle, Spindle & Dyepot and Spin Off as well as in the published proceedings of the 2012 and 2016 Braid Society conferences.
She has shared her skills and experiences with many visitors to Bolivia over the years and now reaches a global audience with her weaving tutorials and travel tales on her blog. She provides online advice and support to weavers through forums such as Ravelry and teaches and speaks at guilds and textile conferences around the world.


Please include your name, address, phone number and email address.